As RF, microwave, and millimeter-wave analog signals of ever higher frequencies become more ubiquitous in cellular and radar applications, the need to manage the integrity of these signals becomes increasingly important. Advanced high frequency analog functions are routinely packed onto semiconductor chips that are dense with complex digital functions. But this presents a problem. Semiconductor-based ICs have many layers of active signals and interconnects, but they do not have readily available low impedance paths to ground. This makes it especially difficult to maintain the integrity of microwave and millimeter-wave signals on chip. Special techniques are required. 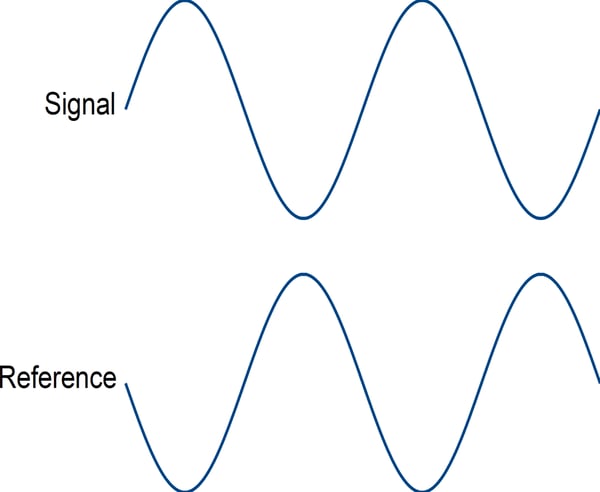 Balun (balanced to unbalanced) circuits are the standard technique for converting unbalanced signals with ground reference into two signals equal in magnitude and opposite in phase. An ideal balun will produce balanced signals in which the reference is an exact inversion of the original. Real world baluns, however, produce signals with imbalance due to lack of perfect grounding at the input, lack of symmetry, transistor offsets, and uneven coupling from the input to the balanced outputs.

There are two categories of imbalance:

Each of these types of imbalance will introduce errors in the signal.

A flux coupled transformer is the most popular balun. It is formed by two separate coil windings around a magnetic core, with one side of the primary winding grounded. The theory of these transformers is explained in many electrical engineering textbooks. These baluns are large and not useful at frequencies above a GHz. The magnetic material is not responsive to high frequency changes.  Furthermore, interwinding capacitance between the coils works to nullify the magnetic coupling by providing a direct path across the windings. Consequently, these baluns are not suitable for on chip conversion of RF signals. 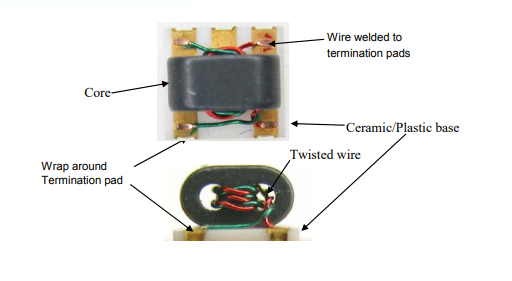 A more useful realization of a balun for implementation on an IC consists of spiral coupled lines on the semiconductor chip. These can be used to handle RF signals above 1 GHz. An example of an 8-12 GHz balun is shown in Figure 3 with two mutually coupled coils. The balun in this example has a 50 ohm input impedance (to match a typical transmission line), and a 70 ohm output impedance for the balanced signals. One terminal of the input (Pm) is grounded to provide a reference, and the other input (Pp) is connected to the single-ended transmission line. 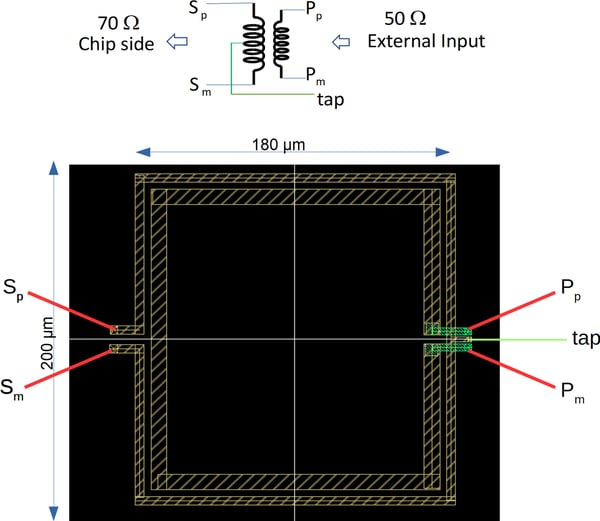 Figure 3: On Chip Balun With Center Tap on Secondary Coil

Unfortunately, this circuit, as described, will produce errors in the balanced signals. Grounding the Pm terminal creates asymmetry and imbalance due to the unequal terminations as seen by the inter-winding coupling capacitance.  Analyzing the circuit with the Method of Moments technique (using a simulation and analysis tool) shows a high degree of both amplitude and phase imbalance, which increases as a function of frequency. This can be seen in the green and purple plots shown in Figure 4. 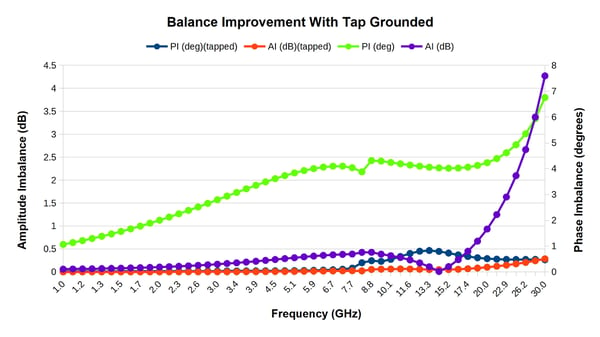 There is an elegant solution to reduce the imbalance. The midpoint of the differential terminal, labeled “tap” in Figure 3, is a virtual ground. By providing a low impedance path from the center-tap to ground, the Sp/Sm balance can be improved significantly.

Note that the balun topology is designed specifically to provide a short external ground connection. Referring to Figure 3, the tap is placed directly on the midpoint of the outer coil, which feeds the balanced signals Sp and Sm. This location at the midpoint is close to the primary IC inputs Pp and Pm, and only a short distance from an external ground, thereby ensuring a low impedance ground connection.

By grounding the midpoint of the secondary turn, the Sm and Sp signals internal to the chip are forced into better balance, eliminating much of the phase and amplitude imbalance that causes signal error. Using the same Method of Moments analysis technique, the plots (blue and red in Figure 4) of the phase and amplitude imbalance of the differential signals, Sm and Sp, shows much lower imbalance values in the 8 to 12 GHz range.

High frequency RF signals on digital ICs require specialized techniques for maintaining signal integrity. This article has shown, through example, one of the techniques that microwave IC designers at Intrinsix use to ensure the fidelity of high frequency signals as they cross from circuit board onto an IC. Techniques such as this are crucial to the successful production of ICs with microwave and millimeter-wave signals.

By Kathiravan Krishnamurthi
Kathiravan Krishnamurthi is a Principal Consulting Engineer at Intrinsix’s Marlboro Design Center. He received his Ph. D degree in Electronics from Carleton University in Ottawa. Kathir brings over 25 years of experience in the design, specification, definition of RF circuits, systems and integrated circuits ranging from low-IF to microwave and millimeter waves. He has designed a number of products in the area of integrated receivers, mixers, amplifiers and frequency multiplier circuits. He also hold 5 patents and more pending.