In a persistent trend, shrinking IC geometries and higher levels of integration are leading to SoCs packed with increasingly more functionality over time. Much of this functionality is implemented in software running on systems with ever more complex architectures. This creates validation problems that go beyond RTL verification. Software functionality and performance must also be validated, prior to tape-out. Failure to validate the software in the system context can result in costly surprises during post-silicon validation. Unfortunately, traditional RTL simulation tools are not fast enough for any meaningful software validation. But hardware-based emulation and prototyping platforms can fill the void.

Engineers at Intrinsix often deploy these platforms as part of a strategy to enable pre-silicon software validation and performance analysis prior to tape-out. These strategies are essential to achieving first pass success. This article will describe one such experience, in which an FPGA based prototyping platform was used to validate the execution and performance of software running on a customer SoC, pre-silicon.

The Cadence Protium S1 Xilinx FPGA based prototyping platform was used in this case study.

The subject of this case study is a customer whose SoC consisted of multiple DSP processors, a CPU, 5 Mbytes of SRAM, a DMA controller, and several other peripherals all tied together with a crossbar interconnect (see Figure 1). A highly parallelized real time signal processing application was to run concurrently on the processors. The application operated on data stored in the processor DRAMs. In the final system implementation, this data would stream from external FIFOs into each DSP via specialized queue input ports. We did not make use of this interface and instead preloaded the data into the DRAMs prior to each test run. This simplified the hardware effort while still allowing us to support our customer’s goal, which was to validate the software from a functional, architectural, and performance standpoint, prior to silicon. 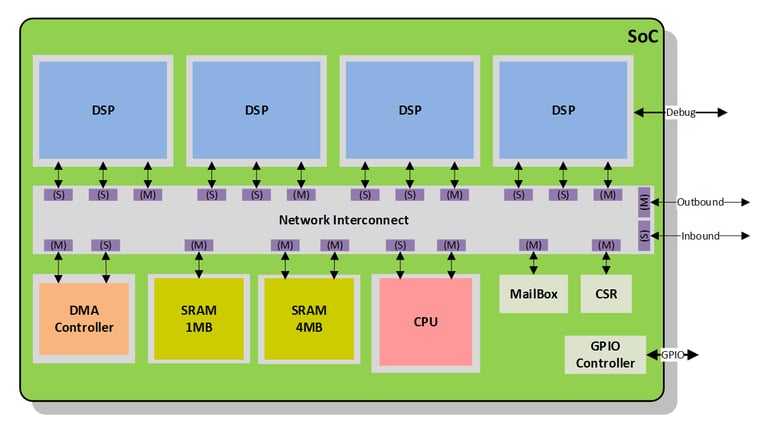 Using a prototyping platform for this purpose allowed us to:

Our goal at Intrinsix was to facilitate our customer’s goal by automating the prototyping platform tool flows, creating a simplified environment for efficiently running tests, analyzing results, and debugging failures.

The prototyping platform used for this project has some basic capabilities that provide a foundation for the scripting environment described in the next sections.

First, it has a set of tools that synthesize the design, perform IO assignment, partitioning, place and route, and generation of design bit files that will load directly onto the prototyping machine. Some of these tools are provided by the prototyping platform vendor, and some by the FPGA vendor.

Each mode has commands (among others) that are capable of:

The signal monitoring command mentioned above samples the value of the signal at the time the command is issued, but it does not produce a waveform display. To enable waveforms, an integrated logic analyzer core must be instantiated with the design on the FPGA. During the compile step, the ILA is interconnected with the desired signals, and triggering conditions are established. While not directly incorporated into the scripting environment, waveform displays proved to be useful during the design bring-up phase, when the basic operation of SoC was being debugged.

We used Xilinx ChipScope for this project.

Because the prototyping platform is based on FPGAs, porting to it required some minor modifications to the ASIC design. First, the ASIC SRAM macros had to be replaced with FPGA inferred RAMs. Second, the phase locked loop implemented within the ASIC had to be removed from the design so that the main clock could be supplied externally. These changes were relatively straight forward and simple to implement.

As part of the software validation process, a series of tests had been written by our customer to exercise various aspects of the SoC. Each test was independent of the others. A goal of the scripting environment was to provide a simple way for our customer to setup and run these tests on the design, in sequence, unattended. Typically, they would run overnight. Each test would:

In addition, the scripting environment had to support JTAG software debug sessions. During these sessions, registers in the DSPs and/or CPU could be examined or modified, software and hardware breakpoints could be set, and software variables could be displayed or changed. This use mode would usually be invoked when individual tests exposed functional or performance behavior that required more scrutiny. To enable JTAG software debug, an add-on prototyping platform daughter card is required, along with third party JTAG probe and software tools. This is discussed in more detail later.

To drive the scripts, a simple text file format was defined which consisted of an ordered list of tests to be run, along with their defining characteristics. For each test, the test file contained a set of comma separated parameters, the most important of which were:

The next sections will describe the major components of the scripting environment. Refer to the flow diagram in Figure 3 showing the interaction of the scripts. 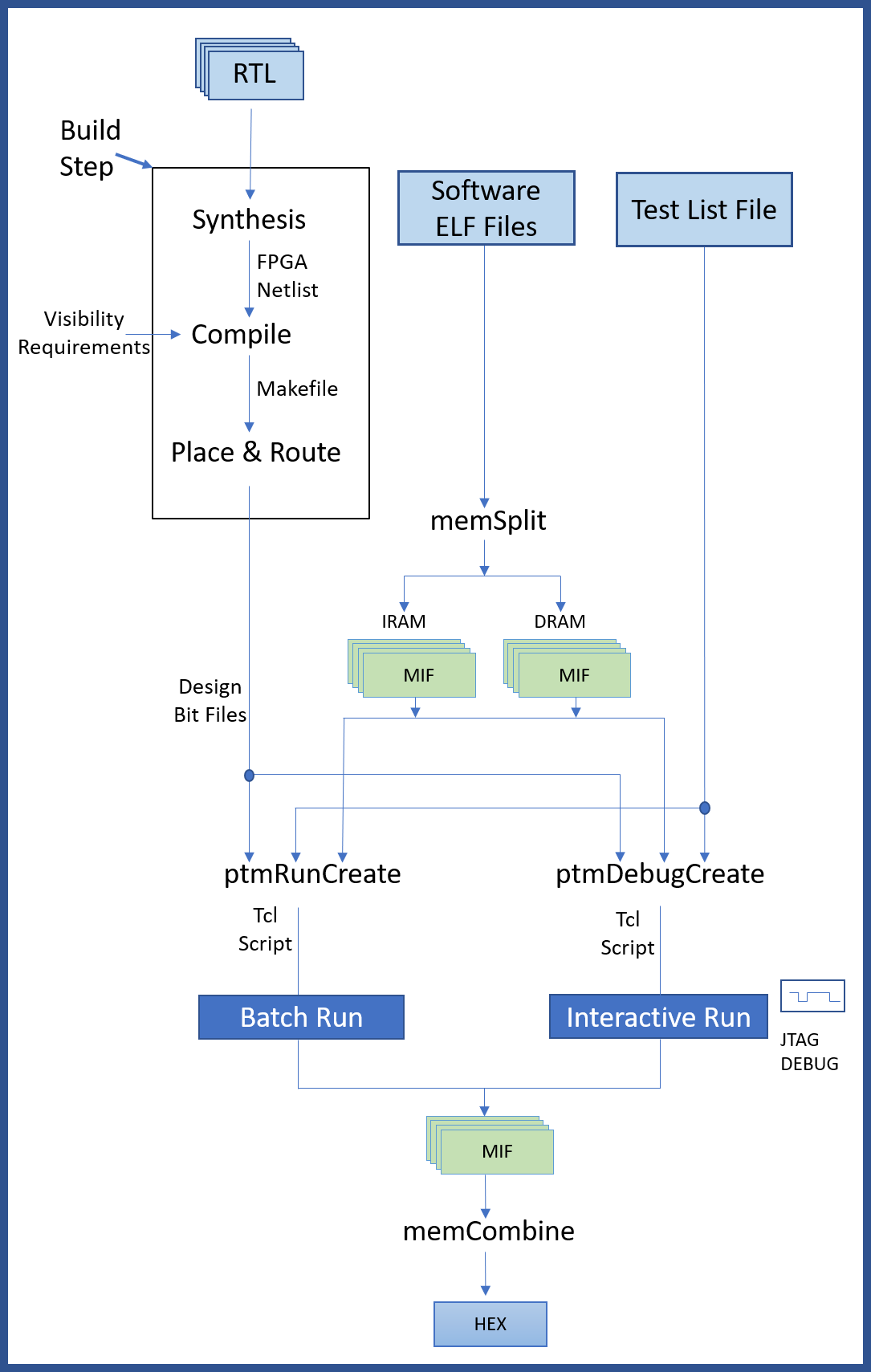 Before a design can be loaded onto the prototyping machine, a set of design bit files must be created. These bit files represent the design, mapped onto FPGA cells, partitioned across several FPGAs, and instrumented with the necessary debugging hooks. The process of building these bit files contains a great deal of algorithmic complexity and bookkeeping, and can be time consuming, depending on the size of the design.

There are three scripted steps that implement the build process:

The result is a set of design bit files that can be loaded directly onto the prototyping machine. The build process can be time consuming, but once completed can be used to run multiple tests and debug sessions. It is not necessary to regenerate the bit files unless the design changes, or additional visibility is required for debugging.

For each test in the test list, software and data files are specified that must be loaded into the memories. These files are encoded in the standard ELF[(Extensible Linking Format) file format. Before a test could be run, each ELF file had to be translated into multiple memory initialization (MIF) files, one for each block RAM in the memory. This step was necessary because each logical memory space in the design was subdivided into multiple physical memory blocks. For example, a 32KB instruction RAM in the design might have been implemented as four 8KB memory blocks. The ELF file used to initialize this IRAM would have to be split into four MIF files, one for each memory block in the IRAM.

This task is performed by the memSplit script, shown graphically in Figure 4. 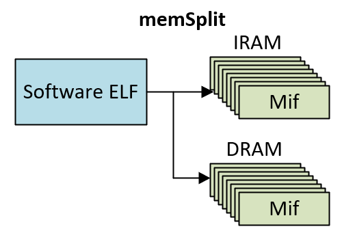 Running a Sequence of Tests in Batch Mode (ptmRunCreate)

Once the MIF files have been created, the next task is to create a sequence of commands that instruct the prototyping machine to run the tests specified in the test list file. A script called ptmRunCreate was written to perform this task. Given the test list, it produces a Tcl script with commands that:

Once the command file was created, it was run unattended on the prototyping machine, typically overnight. A completed test list run will typically create hundreds of dumped MIF files. These dump files contain the ending state of each test run. These test files are then analyzed to determine the status of each test.

Translating Memory Dumps into a Format Suitable for Analysis (memCombine)

A script called 'memCombine' was written to consolidate these separate MIF files into a single ASCII HEX file for each logical memory space in the design. The HEX file was then used for post-analysis. A graphical depiction of memCombine is shown in Figure 5. 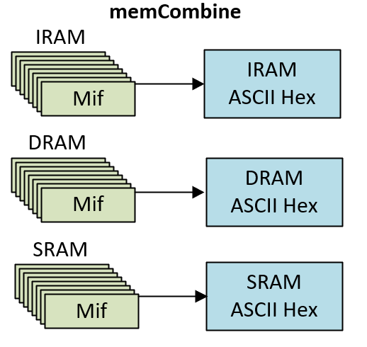 In addition to batch test runs, our customer needed the ability to invoke interactive JTAG software debug sessions on a specified test. This would give them the ability to comprehensively diagnose the test in a standard software debugging environment - allowing them, for example, to set breakpoints, examine registers, and step through the software execution.

To enable JTAG debug, a separate add-on card is required. This card attaches to the daughter card port on top of the prototyping machine. The GPIO pins on this card were then routed to the JTAG debug port on the SoC, as specified in the compile script. A third-party debugger probe was attached to those pins. This, along with additional third-party software allowed our customer to peer into the inner architecture of the DSPs during a software debug session.

We used the SEGGER J-Link Debug Probe with the Xtensa Xplorer software.

Once the Tcl script is run, a user can start a JTAG debug session with the third-party debugger probe and software.

Strategies Employed for the Successful Completion of this Project

Several strategies were instrumental in the successfully completion of this project.

First, to effectively handle the load, the capabilities of the compute server must meet the resource requirements dictated by the size of the design. In this case, the design required a machine with several hundred Gigabytes of RAM, and a high-speed local solid-state drive. In our experience, network drives did not provide acceptable performance. Even with this optimized server configuration, the time required to build design bit files would take anywhere between 15 to 36 hours.

Second, given that signals to be forced and monitored are specified during the compile step, it is particularly important to determine in advance which signals need to be observed for a successful debug session. Adding new signals to the force/monitor/waveform list requires re-creating bit files, which can cost a full day on the schedule. Too many compilation iterations can significantly slow down debug.

When FPGA utilization rises above a threshold, compute times for the place and route algorithm can grow significantly – requiring unacceptably long times, and in extreme cases failing to complete. For this project, the threshold was about 70% utilization.

While it may seem obvious, it is important to ensure that software and hardware versions are compatible. Tools from multiple vendors are used in the validation flow, including the prototyping platform vendor, the FPGA vendor, and the third party JTAG debug tools. Mismatches can result subtle errors that can be difficult to trace back to version incompatibility. Carefully tracking versions can avoid this problem.

Streaming Data from External Sources Can Be Slow

There are several options for streaming data into the design from an external source. The prototyping platform (in this case, the Protium S1) has a PCI-E bus available for this purpose, as well as an SoC IO daughter card for simple DUT IO. For this project, we chose to preload memories with the stream data because of its relative simplicity and high performance. On the downside, this approach pushed our FPGA utilization up, with the attendant problems discussed above.

The custom scripting tools developed for our customer created a straightforward automated environment that simplified use of the prototyping platform. In addition, the debug capabilities of the platform in combination with the third party JTAG debugging tools enabled a rich and efficient debug environment, capable of diagnosing simple and complex problems. Last, but not least, we were able to achieve a 6.67MHz clock speed, which is significantly faster than typical emulation speeds. This allowed us to run many more test cases than would otherwise be possible, and provided an efficient, cycle accurate platform for performing pre-silicon performance analysis and optimization.

The result was a successful validation of software execution and system performance ahead of ASIC tape-out.

Watch the video presentation of this case study Learn how Intrinsix approaches semiconductor projects for first silicon success by downloading the eBook titled "The Roadmap to First Silicon Success with Intrinsix."

By Nick Hassan
Nick Hassan is a Design Engineer at Intrinsix Corp. He began his career after graduating from Worcester Polytechnic Institute in 2016, where he earned a B.S. in Electrical and Computer Engineering and Robotics Engineering. He is continuing his education at WPI, pursuing an ECE master’s degree focused in Computer Engineering. At Intrinsix, Nick has been responsible for design, verification, and most recently emulation of advanced ASICs and SoCs.