Cascode amplifiers are one of the most useful tools in an analog designer's toolkit. They have high input impedance, high gain, and operate over a wide frequency range. They are helpful for almost any application that requires high impedance broadband amplification and are frequently used in RF circuits for tuning, modulation, and amplification.

Cascode amplifiers also work well as drivers. The high isolation of the input from the output makes them ideally suited for this purpose. At Intrinsix, we frequently use them to drive mixers, power amplifiers, and buffer amplifiers for oscillators.

To preserve integrity at high frequencies, signals on an IC are often transmitted as complementary pairs; a technique referred to as differential signaling. Cascode amplifiers can easily be adapted to work with differential signals. Figure 1 shows a traditional differential cascode amplifier implemented with pull-up resistors (RL), representing the resistive load on the amplifier. This amplifier has two characteristics that make it ideal for use as a driver: high isolation and high bandwidth. As will be discussed below, the efficiency of this amplifier is limited by the pull-up resistors. 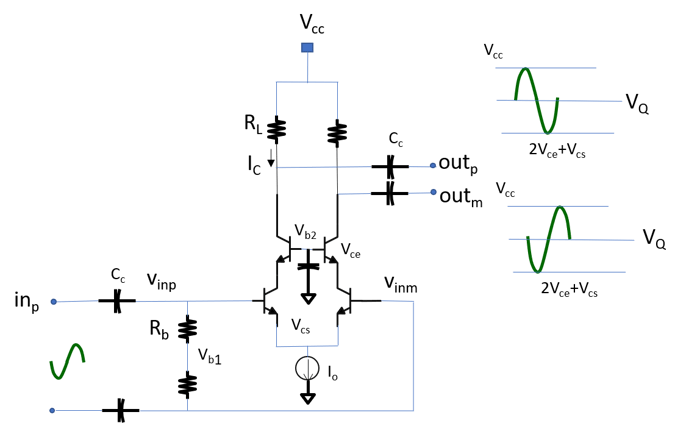 Referring to Figure 1, the amplifier's voltage gain is determined by the transistor current at the collector (IC) and the load resistance (RL). For medium and high amplifier currents, the voltage drop across RL significantly limits the AC voltage swing at the complementary outputs, outp, and outm. With quiescent point VQ midway between VCC and (2VCE + VCS), the peak amplitude is limited to VCC/2 when VCE and VCS are minimized. Also, DC power is lost across the pull-up resistors. These effects reduce the efficiency of the amplifier by limiting the gain and increasing the power loss.

Improving the Efficiency of the Cascode Driver

To improve gain and reduce power loss, engineers at Intrinsix have developed a technique that uses coupled inductors. Refer to Figure 2, which shows a cascode amplifier with inductive pull-ups. The quiescent point of this amplifier is VCC – twice that of the amplifier shown in Figure 1. The dynamic current variation (dIC/dt), supported by the inductors, allows the voltage to swing above VCC, resulting in a twofold increase in gain. Furthermore, the DC voltage drop across the inductors can approach zero, resulting in reduced DC power loss compared to the amplifier with resistive pull-ups. The result is a significantly more efficient cascode driver. 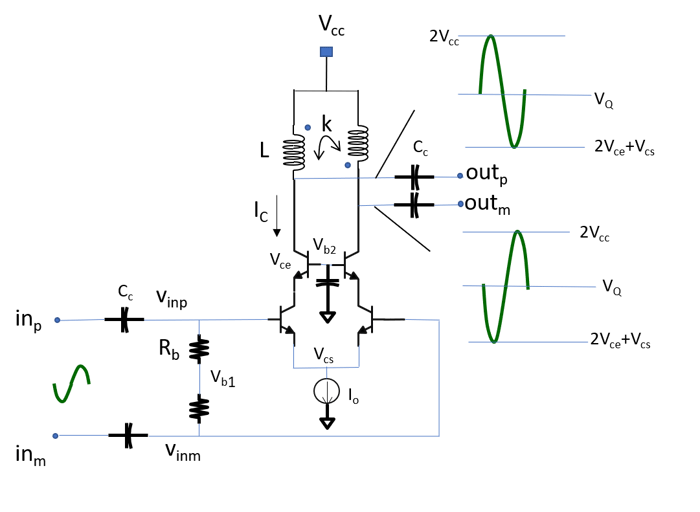 To increase the Q, the positive and negative sides of the inductors are tightly coupled. This increases the inductance per side without increasing the physical dimensions on the IC. By tightly coupling in this way, the inductance can be increased by a factor of (1 + k), where k is the coupling coefficient.

There is one limitation to this approach. Compared to cascode drivers with resistive pull-ups, inductively loaded drivers have a narrower bandwidth. This is because the load capacitance, the inductors, and the output capacitance of the amplifier form a parallel resonance circuit, with the pass band determined by the resonant frequency.

With these techniques, the efficiency of the cascode driver is increased without suffering loss of bandwidth.

By using inductive instead of resistive pull-ups, the efficiency of cascode drivers can be doubled. Techniques for modeling and implementing drivers that use on-chip inductive pull-ups have been developed by analog engineers at Intrinsix. They have been used effectively for years on ICs that work on the first pass silicon.

By Kathiravan Krishnamurthi
Kathiravan Krishnamurthi is a Principal Consulting Engineer at Intrinsix’s Marlboro Design Center. He received his Ph. D degree in Electronics from Carleton University in Ottawa. Kathir brings over 25 years of experience in the design, specification, definition of RF circuits, systems and integrated circuits ranging from low-IF to microwave and millimeter waves. He has designed a number of products in the area of integrated receivers, mixers, amplifiers and frequency multiplier circuits. He also hold 5 patents and more pending.